It’s absolutely impossible to understand why the Turkish government would engage in the suicidal strategy of downing a Russian Su-24 over Syrian territory – technically a NATO declaration of war on Russia – without putting in context the Turkish power play in northern Syria.
President Vladmir Putin said the downing of the Russian fighter jet was a “stab in the back.” So let’s see how facts on the ground allowed it to happen.
Ankara uses, finances, and weaponizes a basket case of extremist outfits across northern Syria, and needs by all means to keep supply line corridors from southern Turkey open for them; after all they need to conquer Aleppo, which would open the way for Ankara’s Holy Grail: regime change in Damascus.
At the same time Ankara is terrified of the YPG – the Syrian Kurd People’s Protection Units – a sister organization of the leftist PKK. These must be contained at all costs.
So the Islamic State group – against which the United Nations has declared war – is a mere detail in the overall Ankara strategy, which is essentially to fight, contain or even bomb Kurds; support all manner of Takfiris and Salafi-jihadis, including the Islamic State group; and get regime change in Damascus.
Unsurprisingly, the YPG Syrian Kurds are vastly demonized in Turkey, accused of at least trying to ethnic cleanse Arab and Turkmen villages in northern Syria.
Yet, what the Syrian Kurds are attempting – and to Ankara’s alarm, somewhat supported by the U.S. – is to link what are for the moment three patches of Kurdish land in northern Syria.

A look at an imperfect Turkish map at least reveals how two of these patches of land (in yellow) are already linked, to the northeast. To accomplish that, the Syrian Kurds, helped by the PKK, defeated The Islamic State group in Kobani and environs. To get to the third patch of land, they need to get to Afryn. Yet on the way (in blue) there is a collection of Turkmen villages north of Aleppo. 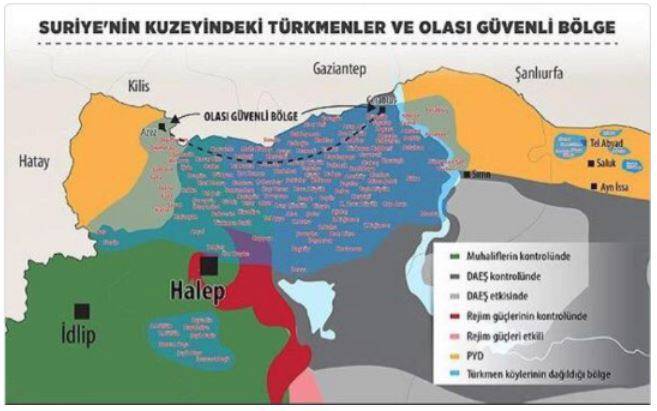 The strategic importance of these Turkmen lands cannot be emphasized enough. It’s exactly in this area, reaching as much as 35 km inland, that Ankara wants to install its so-called “safe zone,” which will be in fact a no-fly zone, in Syrian territory, ostensibly to house Syrian refugees, and with everything paid by the EU, which has already unblocked 3 billion euros, starting Jan. 1, via the European Commission (EC).

The now insurmountable obstacle for Turkey to get its no-fly zone is, predictably, Russia.
Using the Turkmen
Who are the Turkmen? Here we need to plunge back into ancient Silk Road history. There are roughly 200,000 Turkmen living in northern Syria. They are descendants of Turkmen tribals who moved into Anatolia in the 11th century.
Turkmen villages also sprout north of Idlib province, west of Aleppo, as well as north of Latakia province, west of Idlib. And it’s here where we find a rarely discussed bunch: a gaggle of Turkmen militias.
The myth of innocent Turkmen civilians being slaughtered by the “Assad regime” is, well, a myth. In Washington these militias are considered “moderate rebels” – as much as they have merged with all sorts of jihadi or jihadi-gobbled outfits, from the ever pliable construct Free Syrian Army to Jabhat al-Nusra, a.k.a. al-Qaida in Syria (which Vienna finally branded a terrorist group).
Predictably, Turkish media hails all these Turkmen as “freedom fighters,” a la Ronald Reagan in the 1980s jihad Afghan. Turkish media spins the whole of their territory is controlled by an “innocent” Turkmen opposition, and not the Islamic State group. Not the Islamic State group, yes, but mostly al-Nusra, which is virtually the same thing.
For Russia, there’s no distinction, especially because a gaggle of Chechens, Uzbeks and Uyghurs (Chinese intel is on it) have sought harbor among these “moderates.” For Russia what matters is to smash any possibility of a future 900 km-long Jihad Highway between Aleppo and Grozny.
And that explains the Russian bombing of northern Latakia province.  Ankara, predictably, went ballistic. The Foreign Ministry had even threatened Russia only a few days ago; the “Russian side’s actions were not a fight against terror, but they bombed civilian Turkmen villages and this could lead to serious consequences.”
Ankara directly supports Turkmen militias with humanitarian aid but what really counts are weapons; truck deliveries controlled by the MIT – Turkish intelligence.
This all fits into the ruling AKP party mythology of defending even pre-Ottoman populations; after all they always provided “good services” to Islam. Syrian Turkmen are as pious as the AKP leadership in Ankara.
The plot thickens
For Russia, the area known as Turkmen Mountain, or heights – which Turks call Bayirbucak – north of Latakia province, is a major target.  Because that’s where we find the Weapon Highway – through which Ankara, side by side with the CIA, weaponizes these militias.
For Russia, any possibility of militias allied with Salafis and Salafi-jihadis trying to make a push to conquer overwhelmingly Alawite Latakia province is a red line because this would threaten Russia’s airbase at Khmeimim and eventually even the port of Tartus.
So essentially we have CIA weaponizing – those famous TOW anti-tank missiles – using a smuggling route through Turkmen territory which happens to be an al-Qaeda in Syria-run Ankara power base. This is prime territory for U.S., Turkey and Saudi Arabia to undermine Damascus, and most of all prime proxy war territory: NATO (U.S.-Turkey) against Russia.
The CIA spins the TOWs go to 45 “vetted” – thus “moderate rebel” – outfits. Nonsense; the weapons have been seized by the more experienced jihadis of al-Qaida in Syria, as well as the nebulae known as the Army of Conquest, supported by Saudi Arabia.
So to smash Jabhat al-Nusra and the Army of Conquest for good, Russia started to bomb the Turkmen smugglers, which are hardly “moderates;” they are infiltrated all over by Turkish Islamo-fascists – such as the ones who machine-gunned Russian pilot Lt. Col Oleg Pershin as he was parachuting, a war crime according to the Geneva Conventions.
The stakes for Russia couldn’t be heavier because by using Turkmen tribals, Turkey is already planted deep inside northern Syria.
So expect Russia to substantially increase bombing of Turkmen areas – way beyond just a reprisal for the killing of the Russian pilot. 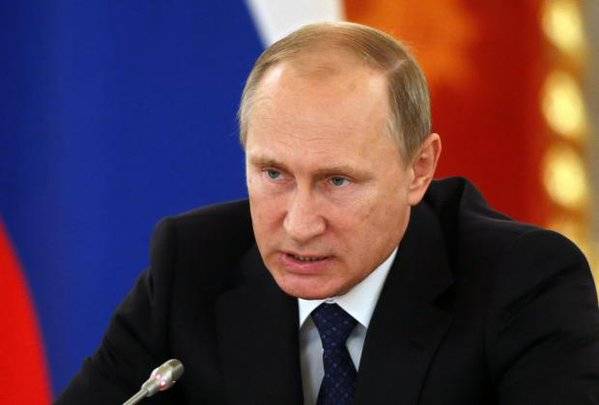 Elsewhere, Russia has plenty of other options – as in further weaponizing the YPG; that would allow them to finally take over the stretch of the border between Afryn and Jarablus that is still controlled by the Islamic State group. Ankara will be apoplectic if Syrian Kurds unite their so far unconnected territory in what they call Rojava.
The bottom line is that Turkey and Russia simply cannot bepart of the same coalition fighting the Islamic State group because their objectives are diametrically opposed.
Istanbul-based historian Cam Erimtan outlines the big picture:
“Turkey’s new government took the reins on the same day the Russian jet was downed. And now the wily Prime Minister Davutoglu and the unwieldy President Erdogan are engaging in damage control and domestic mobilization, for the moment even dropping their favored rhetoric of Islamic solidarity and playing the nationalist card to the full. Even though the military action will no doubt lead to huge gains in domestic popularity, the economic consequences have already started to be felt, with Russia curbing the import of Turkish goods. This may indicate that the AKP-led government solely acted as NATO’s lackey, ignoring the realities on the ground and reveling in boisterous grandstanding.”
The grandstanding won’t last long because Russia will react in a cold, calculated, swift, multi-pronged and unexpected way to the downing of the Su-24.
The Russian missile cruiser Moskva – crammed with air defense systems – is now covering the whole region. Two S-400 systems will cover all of northwest Syria and the southern Turkish border. Russia is able to electronically jam the whole of southern Turkey. There’s no way Erdogan will have his EU-paid “safe zone” inside Syria unless he goes to war against Russia.
What’s certain is that Russia’s number one priority from now on is to smash Turkey’s extremist strategy in northern Syria for good.
Source:
http://russia-insider.com/en/politics/why-turkey-stabbed-russia-back/ri11608