Nouman Ali Khan is a disciple, student and follower of Dr Abdus-Samie, a Deobandi Salafi cleric of Faisalabad (president of local chapter of Dr Israr Ahmed’s Anjuman Khuddam ul Quran) who was himself a disciple of notorious pro-Taliban cleric Dr Israr Ahmed. Dr Israr Ahmed was known for his hatred of the family of Prophet Muhammad (pbuh) and was also a hater of Sunni Sufi and Shia beliefs. Dr Abdus-Samie later settled in the USA where he continued to misguide and convert peaceful Sunni and Hanafi Muslims to radical Deobandi and Salafi Wahhabi ideologies.

Nouman Ali Khan is an American Deobandi Muslim speaker and founder, CEO and lead instructor at The Bayyinah Institute for Arabic and Qur’anic Studies. Funded by Saudi Arabia and the worldwide Salafi Wahhabi and Deobandi fraternity, he is ranked amongst the 500 Most Influential Muslims in the world. He is successfully converting Sunni Hanafi and Sufi Muslims to Salafi, Wahhabi and Deobandi ideologies and categorically condemns various Sunni Sufi and Shia beliefs.

“Nouman Khan began his formal Arabic training during his childhood schooling in Riyadh, Saudi Arabia. He continued his Arabic grammar study in Pakistan, where he received a scholarship for ranking among the top 10 scores in the national Arabic studies board examination. Under the guidance of Dr. Abdus-Samie, founder and formal principal of Quran College in Faisalabad, Pakistan, he developed a keen interest in Arabic grammar. He further benefited from Dr. Abdus-Samie by internalizing his unique teaching methods and later translating his work into English. Nouman currently serves as professor of Arabic at Nassau Community College and has taught Modern Standard and Classical Arabic at various venues for nearly 6 years with over 700 students” Source: http://kalamullah.com/nouman-alikhan.html

Nouman’s agenda is to slowly but surely convert peaceful and naïve Sunni Sufi and Hanafi Muslims to Deobandi (semi-Wahhabi) and Salafi-Wahhabi ideologies. He, along with Zakir Naik, Farhat Hashmi, Javed Ghamidi etc, paves the way for recruitment of Al Qaeda, Taliban and Sipah-e-Sahaba (ASWJ-LeJ). 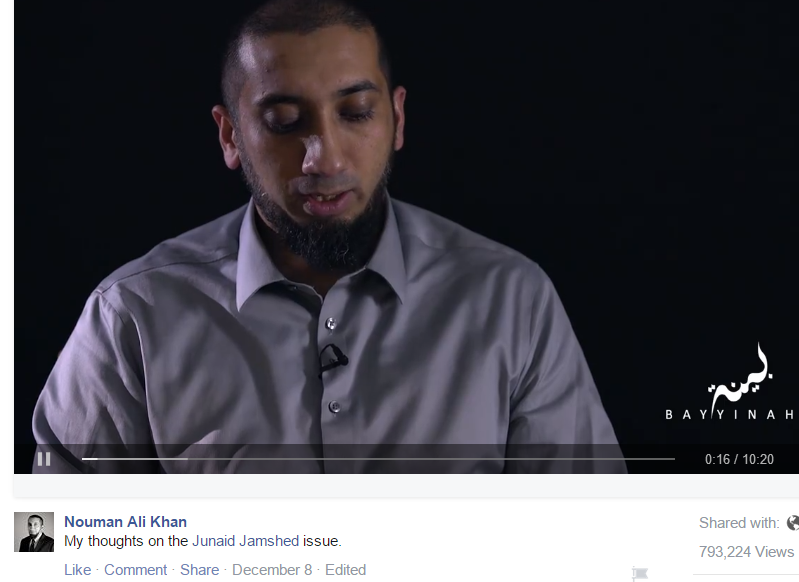 In 2014, he released a video statement in defence of Pakistan’s Deobandi tablighi preacher Junaid Jamshed when he was accused of blasphemy. While Noman deemed it fit to specifically defend his Deobandi colleague, he never bothered to speak for the rights of 45,000 Sunni Sufis, 22,000 Shias and hundreds of Ahmadis, Christians and Hindus killed by Deobandi takfiri terrorists of Taliban and Sipah-e-Sahaba (SSP aka ASWJ aka LeJ) in Pakistan.

My thoughts on the Junaid Jamshed issue.

Here is how some of his readers and followers commented (on his facebook wall) on his video statement in defence of Junaid Jamshed Deobandi:

Naveed Ali Khan said: You have said a lot, and references are good, only issue is why you are not speaking for those in minorities who were burnt alive, or those who are in prison for same crime based on allegations, why not you talk about them? Does what you say apply on all accused and those who were innocent but murdered, as there was never any justice provided. This nation of ignorant has gone too far and if you want to help people, lets not select from the victims whom you think is right although he is accepting his mistake and asking for forgiveness, but include those as well who never accepted or asked for forgiveness as well. Help the helpless so you could be helped, talk about wider jurisdiction and interpretations and improving the laws, so weak can be protected. If not, it is not possible that you want to save one house while whole neighborhood is burning.

Sidra Fatima said: May be you haven’t heard Nouman Ali Khan’s lectures before. . Many times he talked about tolerance for non muslims in Islam and what Allah says and how Prophet Mohammed SAW treated them.. MashAllah Allah gave brother nouman so much wisdom and knowledge. All his lectures are full of good advice for us and teach us how to deal with situations according to the book of Allah

Adnan Younus said: Please post me a vdo which he adress teh core issue or only specifying the incident whern the christian couple got burned alive or any other were killed? if u have such clip please post

Zain Hasan said: Brother, you are a great voice mA…and you have lots of followers from diverse backgrounds. I really appreciate your above message, just a small request though…Prophet SAWW was rehmat-ullil-AALAMEEN, not just rehmat-ullil-Muslameen. Can you please also try to raise voice for many non-muslims in Pakistan who have been accused of blasphemy, and who either have been mercilessly killed (as a MERE accusation is enough in Pakistan), or who are languishing in jails for the alleged crime? If you can kindly do that, we can raise much more awareness about the unfair practices in which the minority community is routinely targeted. Being the followers of the person who is Mercy for all Mankind, I am sure we will make him very proud as well if we follow his values of mercy and kindness to everyone. JazakAllah

Azra Syed said: Brother no one from the public is angry with JJ but it is the matter of equally treating everyone. These are the ulemas of other sects than his, after his life. And these are the people who have been issuing fatwas against everyone for committing blasphemy. Why you and other scholars came forward before with such verses when innocent people were punished and even brutally killed. Amazingly all sects of maullanas are coming up with Quranic verses everyday. What about Junaid Hafeez? He is in the prison. We only want everyone should be treated in same way! Is there not even a single word from the holy book to support other people, but JJ. It’s quite interesting when your own house is on fire then rules are different but if it’s someone else’s then it’s a bonfire night!

My thoughts on the Junaid Jamshed issue.

In December 2014, in the aftermath of Deobandi Taliban’s attack on Peshawar army school in which more than 132 children and tens of teachers were massacred, he released a video condemning the massacre but not once did he mention the identity of Taliban and ASWJ-LeJ terrorists nor did he refer to their Deobandi takfiri ideology.

Nouman founded Bayyinah in 2006, after serving as a professor of Arabic at Nassau Community College. His current residence is in Dallas, Texas. He also lectures internationally on the matters of Tafsir and learning Arabic to understand the Quran.
Noman’s agenda is to convert peaceful Sunni Sufi Muslims to the more radical Salafi Wahhabi and Deobandi ideologies from whereon it is easy for Al Qaeda, Taliban and ASWJ (SSP) to further radicalize these converts for transnational terrorism in North America, Europe, Australia, Middle East, South Asia and Africa.

Having studied in Pakistan, he does taqleed although the lack of cap suggests he has salafi leanings. He is also inclined towards Jamaat-e-Islami Pakistan which is a known pro-Deobandi-Wahhabi pro-Taliban outfit.

He praises and follows known Nasibi (enemies of Ahlul Bayt) scholars such as Amin Ahsan Islahi and Dr Israr Ahmed.

Nouman Ali Khan considers the cerebration of the Prophet’s birthday (Milad or Maulid) as a non-issue, in other words an insignificant event.

He denies that Prophet Muhamamd (pbuh) and Allah’s chosen prophets, aulia etc can do tawasul (intercession).

See the attached clip wherein he says that he doesn’t have any opinion on the celebration of prophet’s birthday because it a “NON-ISSUE”!!

Nike89x said: I personally know Ustad Nouman Ali Khan. Spent a lot of time with him over 9 months.
The thing I love about him is that he doesn’t get into fiqh. He strictly sticks to Arabic studies only.
He says that fiqh is a personalized thing and for that individual only.
He consults with Shaykh Abdul Nasir Jangda (Graduate of I believe Deobandi madrassa Binoria Town Karachi) on a lot of issues.
In my opinion he’s very beneficial to listen to.
And I’m not a salafi at all. I follow the Deobandi Ulema.

Kid said: At the very beginning it was Dr.Zakir Naik and the rest of the Brothers on peace TV, than to Brother Zahr Mahmood, abdul jabbar etc(Brothers with inspiration speech), but now I listen to Noumin Ali Khan and Anwar Al Awlaki.

Hamid Ali said: Nouman Ali Khan is a Deobandi/Madudid-type who is very loose on following Madhabs. Rational thinking will dictate that you should stay away from anyone who tries to hide their beliefs. Naturally this is a very sinister move. He is a severe deviant operator, you should not let his words enter your ear lest something enters your heart that you cannot later remove. He is n’t tied to any particular group. He is extremely superficial when it comes to hard core topics of aqeedah,

Dharyn Dharyn: Nouman never said that he is a najdi but i always knew he was one..Satanic goat face

Segment 3:
Refutes the Sunni Hanafi, Sufi and Shia belief of tawasul and shiafa’at (inercession) and describes it as polytheism (shirk) 1:20 to 2:14

Segment 4:
Claims that Prophet Muhammad (pbuh) will not have any authority to do the shiafaat for his own daughter Fatima (r.a.). (9.00 to 9.40)

Segment 5:
Defends Junaid Jamshed Deobandi, asking for the pardon for his alleged blasphmey – but no such appeal for Taseer, Aasia Bibi, Shias, Christians, Ahmadis? 6:25 to 8:17

Segment 6:
Not unlike the Taliban and ASWJ Deobandi clerics, Nouman Ali Khan generically mentions and condemns the Peshawar army school attack but doesn’t even once clearly name and condemn the Taliban or Doebandi khawarij. 6:35 to 7:20 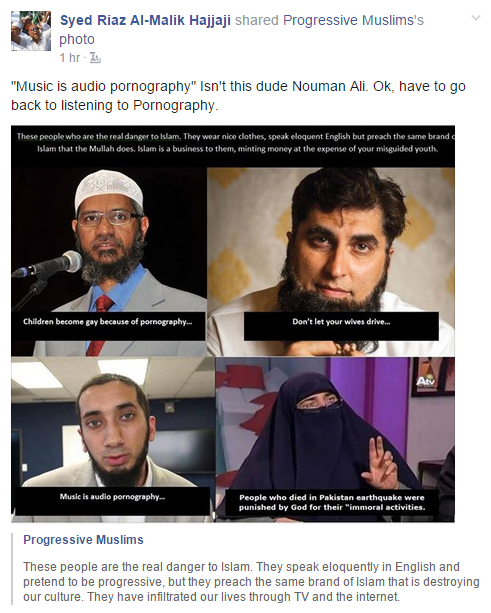