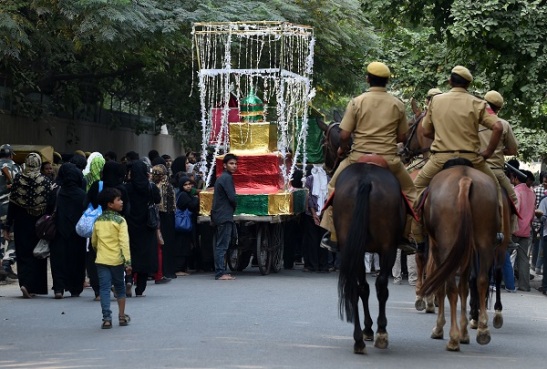 These days, we’re accustomed to news of sectarian violence out of South Asia. This week, Pakistan witnessed yet more vigilante murders of allegedly blaspheming Christians. The specter of Hindu-Muslim tensions in neighboring India, which have previously bubbled over into strife, seems to forever hang over the country.

So it’s worth recounting a small story that speaks to a far deeper history than the divisions and rancor that now seem to make all the headlines.

Yesterday, Indian Shiites commemorated Ashura, which for them is a day of mourning that honors the martyrdom of the Imam Husain, grandson of the Prophet Mohammad, who was supposedly killed at the 7th century Battle of Karbala. That historical event prefigured the schism between Sunnis and Shiites, and is remembered annually through passion plays known as the ta’ziyeh or taziya and startling scenes of ritual scouring and self-flagellation.

Joining the throngs in Delhi on Tuesday was an unusual community of mourners. They carried out their own taziya procession and beat their chests in lamentation. But they were Hindus, not Muslims.

A report in the Times of India follows these Hussaini Brahmins, also known as Mohyals, a community of Hindus in North India who adhere to certain Muslim traditions and rituals. According to Mohyal lore, a number of famous ancestors fought on Husain’s side at Karbala and died in the battle. The community now bears the legacy of that mythic lineage.

They embrace an eclectic range of Hindu and Muslim practices. “We believe that both Hindus and Muslims should follow each other’s rituals and traditions,” Rajinder Kumar, a Mohyal man living in the environs of Delhi, tells the Times of India. “Our community observes Muharram and women keep fasts just as Muslims do.”

Despite the relative obscurity of these Hussaini Brahmins, their existence speaks of a wider legacy. For centuries, the subcontinent has been a crucible for many divergent traditions and beliefs, some coming into friction, most existing in harmony. Muslims celebrated Hindu holidays; Hindus still worship at the old shrines of Sufi saints.

This one small community’s pluralistic worldview is a world away from the nationalist politics that has sometimes swept up recent discussions of religion in South Asia.

And more perhaps should pay heed. “We have been taking out taziyas for years but we didn’t know even Hindus also observe Moharram,” a Muslim passerby told the Indian newspaper.