In April 2014 I first visited Syria, going to Homs and Latakia, in addition to Damascus. On each of my three subsequent trips to Syria, speaking moderate colloquial Arabic, I have been able to interact one-on-one with Syrians there, whether in markets, taxis, on the streets or in areas I visited.

In Latakia, many of the the over 1 million Internally Displaced Persons from Idlib, Aleppo and surrounding areas who are being housed and supported by the Syrian government spoke of the same heinous kidnappings, beheadings, and other crimes that most media currently only associate with Da’esh (ISIS), but which were perpetrated (with Turkish support) by the so-called FSA and other terrorist factions.

A man from Harem, near the Turkish border, spoke of being kidnapped by FSA terrorists, and of the decapitations of Harem residents, heads sent home in boxes.

“The terrorists attacked us, terrorists from Turkey, from Chechnya, and from Arab and other foreign countries. They had tanks and guns, like an army, just like an army. For 73 days we were surrounded in the citadel of Harem. They hit us with all kinds of weapons. We had women and children with us. They showed no mercy. When they caught any of us, they slaughtered him, and then send his head back to us. They killed over 100 people, and kidnapped around 150… children, civilians, soldiers. Until now, we don’t know what’s happened to them,” he said.

People from the village of Kassab spoke of the joint Turkish-Nusra attack on their village in March 2014, of escaping with the help of Syrian soldiers, of the over 80 who were slaughtered, including 13 who were beheaded, and of the raping and plunder of their people and homes. “They raped our older women because they couldn’t find any girls,” one resident told me.

In Latakia, I met two Americans living there for the last twenty years. The mother told me of Western reporting (she cited an LA Times article by way of example) which alleged Syrian security were cracking down on people in Latakia one day but that on that particular day she had been to all the named areas of the city and there was no unrest.

In Homs, I met with local Syrians involved in the Reconciliation process, including religious leaders and community members. The Old City of Homs in April 2014 was still occupied by terrorist factions. When I returned in June, it had just been liberated. I was able to speak with residents who had stayed during the Farouq Brigades (FSA) and al-Nusra’s occupation of the Old City, who denied it was a “revolution” and spoke of terrorists’ thieving every last food item from their home.

A local man spoke of the militants’ assassination of 75 year old Dutch priest Father Frans van der Lugt who, while neither pro-government nor pro-“rebel” did write of witnessing armed men among the early protests, “who began to shoot at the police first. Very often the violence of the security forces has been a reaction to the brutal violence of the armed rebels.” Others spoke of the sectarian slogans in the early protests in Homs, including the slaughtering of Alawis and the driving out of Christians.

Many historic churches in the Old City were damaged or destroyed, and looted, by the terrorist factions.

When I visited Homs again in December 2015, most of the churches were repaired enough to use, and some of the residents had patched up their homes and opened new shops and were preparing to celebrate Christmas for the first time in years.

In June 2014, I visited the recently-liberated ancient village of Ma’aloula. There, terrorists primarily from Nusra besieged the village for 8 months, plundered from its ancient monasteries, destroyed and desecrated what couldn’t be stolen and murdered the daughter of the priest of St. Thekla convent, Konstantin al-Khouri, who explained to me that he himself then took up arms to defend the village.

In Damascus I met with various leaders of internal opposition, who notably all rallied behind President al-Assad and against the external Riyadh and Turkish-backed “opposition” put forth by the West. The Kurdish representative, Berwine Brahim, stated, “We want you to convey that conspiracy, terrorism and interference from Western countries has united supporters of the government and the opposition, to support President Bashar al-Assad. We opposition members see that President al-Assad is the guarantee of Syria.”

On two occasions I have met Syria’s highest Muslim religious authority Grand Mufti, Dr. Ahmad Badreddin, whose own son Saria, 22, was assassinated in October 2011. The following day, Mufti Hassoun publicly called for the pardon of the assassins, who in turn sent a message they would kill him next. Hassoun continues to use his platform to call for Syrians to lay down their weapons and “come back” to their country. He rejects the sectarianism sent to Syria by Saudi Arabia and calls for the rehabilitation of European mosques influenced by Wahhabism.

In June 2014 I met with Minister of Reconciliation, Dr. Ali Haidar, an eye doctor and leader of the Syrian Social Nationalist Party (SSNP). In June 2012, Haidar took the position of Minister of Reconciliation in order to further the process of those armed Syrians who wish to reconcile. The movement continues to see Syrians granted amnesty and returning to their normal lives. Haidar’s son Ismail was assassinated in May 2012 by terrorists hoping to kill Haidar himself.

Staying in the Old City of Damascus, I got a taste of the daily mortar terrorism, then primarily from “moderate” “rebels” in their stronghold of Jobar, just east of the city. I visited a hospital where children from the mortared Manar school were being treated for mild to severe injuries. On another visit, in Damascus, I visited the University Hospital, where children, women and men were being treated for injuries from mortars and missiles fired by terrorists in Douma. Many had amputations, many were in intensive care, including with severe brain injuries.

In Damascus, IDPs from the Yarmouk district spoke of terrorists taking over their homes, stealing food, sniping at them. Those being housed in a governmental school had better circumstances than those sardined in UN housing. Most wanted to go home. In spite of the corporate media and Ken Roth type accusations of the Syrian government being the cause of suffering in Yarmouk, the government continues to send or facilitate entry of aid into the district. As with Madaya, that aid is often stolen by terrorists for their own use or for extortionist re-sale.

In December 2015, on my second visit to Yarmouk, Palestinian leadership informed me the vast majority of the former 1 million Syrians and around 170,000 Palestinians had left or been evacuated. Around 5-6000 people remained, including fighters and those supporting the militants. I was able to enter roughly 400 metres into the district before Palestinian soldiers accompanying me told me to go any further would be to welcome a sniper’s bullet.

The al-Zahra’a district of Homs has been the site of repeated terror bombings and suicide attacks which get virtually no coverage in the media. I visited in December 2015 just days after a triple-explosion series of terror bombings which state media reported killed at least 16 residents (but which later local updates put over 20 murdered). Since then, al-Zahra’a has been hit three further times by terrorist bombings. The area comprises a variety of faiths, including many IDPs from elsewhere in Syria. One of the recently-murdered victims was a Christian man who had fled Sadad, which faces Da’esh and other terrorists’ attacks. Zahra’a is not the only area of Homs to be terror-bombed. In my April 2014 visit I spoke with residents of Karam al-Luz who had survived a double-car bombing which killed at least 25 residents.

The al-Waer district of Homs in December 2015 saw a deal in which a few hundred of the armed militants and their families were shuttled to Idlib and surrounding areas. Another 2,200 primarily anti-government mercenaries remain within the residential area of al-Waer. The government continues to supply residents with food, medicine, electricity (free) and water (free) and has a bread factory at the last checkpoint before entering al-Waer, which I visited in December 2015. The factory receives wheat from the government and supplies the residents within with bread (in spite of the presence of the anti-government militants). While observing Syrians walking towards the checkpoint to the terrorist-held area, I was cautioned by security to step back: there is a ceasefire, by the militants within could violate that at any time. 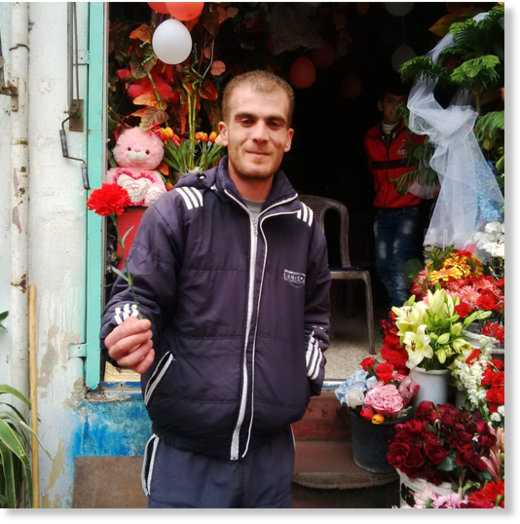 In Sweida, a Druze area southeast of Damascus which has largely fought off the attacks of militants since the beginning of the crisis in 2011, residents told me they had from very early on recognized the ‘revolution’ as a foreign plot against Syria. Druze leader, Sheikh Hammoud al-Hanawi (known as Sheikh al-Aqel) reiterated what residents had said about this plot, and spoke of how Sweida’s young and old men have protected the region and stand with the Syrian Arab Army.

In Sweida, many residents who had been living abroad returned to open new restaurants, hotels and businesses, in order to support their sanctions-shattered economy. As with Latakia, Tartous, and Damascus, Sweida has also absorbed large numbers of IDPs from other southern areas, including Sunnis from Dara’a.

In spite of the security within Sweida, on the drive back to Damascus, the driver noted that, just 30 km to the east, Da’esh were present, but unable to break into Sweida. The Sweida-Damascus road was formerly perilous due to land mines, snipings and kidnappings, but now is highly-secured by the Syrian army. The driver, whose own friends disappeared in kidnappings added, “but here we all support the army.”

In addition to hearing the tragic stories of Syrians’ suffering these past five years, I’ve also been party to celebrations, and very moving Easter and Christmas services and music. I’ve been invited into the homes of Syrians and showered with hospitality, and above all, seen the culture, love and resilience that makes Syrians proud of their country and people.

Wherever I’ve gone in Syria (as well as many months in various parts of Lebanon, where I’ve met Syrians from all over Syria) I’ve seen wide evidence of broad support for President al-Assad. The pride I’ve seen in a majority of Syrians in their President surfaces in the posters in homes and shops, in patriotic songs and Syrian flags at celebrations and in discussions with average Syrians of all faiths. Most Syrians request that I tell exactly what I have seen and to transmit the message that it is for Syrians to decide their future, that they support their president and army and that the only way to stop the bloodshed is for Western and Gulf nations to stop sending terrorists to Syria, for Turkey to stop warring on Syria, for the West to stop their nonsense talk about “freedom” and “democracy” and leave Syrians to decide their own future.

“We want the Syrian state to return to how it was and most importantly, President Assad will stay. We love Bashar al-Assad very much. Syria was wonderful, the state supported us in many ways (free education & health care, food and oil subsidies…) Syria had security. Our country will win and return to how it was, and better. Souria samideen… Syria remains steadfast.”