This is the untold story of the three-and-a-half-year siege of two small Shia Muslim villages in northern Syria. Although their recapture by the Syrian army – and by Iranian Revolutionary Guards and Iraqi Shia militias – caught headlines for a few hours three weeks ago, the world paid no heed to the suffering of these people, their 1,000 “martyrs”, at least half of them civilians, and the 100 children who died of shellfire and starvation.

For these were villages that remained loyal to the Syrian regime and paid the price – and were thus unworthy of our attention, which remained largely fixed on those civilians suffering under siege by government forces elsewhere.

Nubl and Zahra should be an 18-minute drive off the motorway north-east of Aleppo but the war’s front lines in the sharp-winded north of Syria have cut so deeply into the landscape that to avoid the men of the Jabhat al-Nusra and Isis, you have to drive for two hours along fields and broken country roads and through villages smashed and groined by the Syrian offensive.

Syrian and Iranian flags now hang from telegraph poles outside the damaged village mosques, a powerful symbol of an alliance that brought these people’s years of pain to an end. Among them were at least 100 Sunni Muslim families – perhaps 500 souls – who, way back in 2012 chose to take refuge with their Shia countrymen rather than live under the rules of the Islamists.

The police commander, Rakan Wanous, kept meticulous records of the siege and deaths in Nubl and Zahra and recorded, with obviously bitter memories, the threatening phone calls he took from the Nusra forces surrounding his two villages. Wanous was also officially in charge of many other towns that had fallen to Nusra. Yes, he said bleakly, the calls came from the neighbouring Sunni village of Mayer. “Once, they told me they were going to come and slaughter us – and slaughter me – and I told them: ‘Well, let’s wait until you get here and see.’ On another occasion, they threatened to shower us with chemical weapons.” 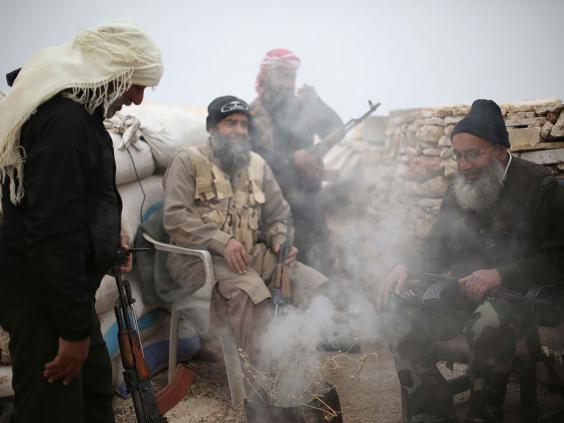 From the start, Nubl and Zahra were defended by their own pro-regime militiamen, a force perhaps 5,000-strong who were armed with rifles, rocket launchers and a few mortars. Up to 25,000 of the original 100,000 civilian inhabitants managed to flee to Turkey in the early days of the fighting. The rest were trapped in their homes and in the narrow, shell-blasted streets. “We reached a period after a year when we were in despair,” one of the local civil administrators, Ali Balwi, said. “We never expected this to end. Many of the civilians died because their wounds could not be cared for. We ran out of petrol early on. They cut off all electricity.”

The villages’ sole link with the outside world was the mobile phone system that operated throughout the siege so that civilians and militiamen could keep in touch with families and friends in Aleppo. Mohamed Nassif, a 61-year old civil servant, recalled how he had, in desperation, called the UN in New York to plead for help and humanitarian aid for the villages. “I spoke to someone – he was a Palestinian lawyer – at the UN Human Rights office in New York and I asked if there was any way the UN could lift this siege and help us. I asked for humanitarian aid. But they did nothing. I did not hear back from them.” 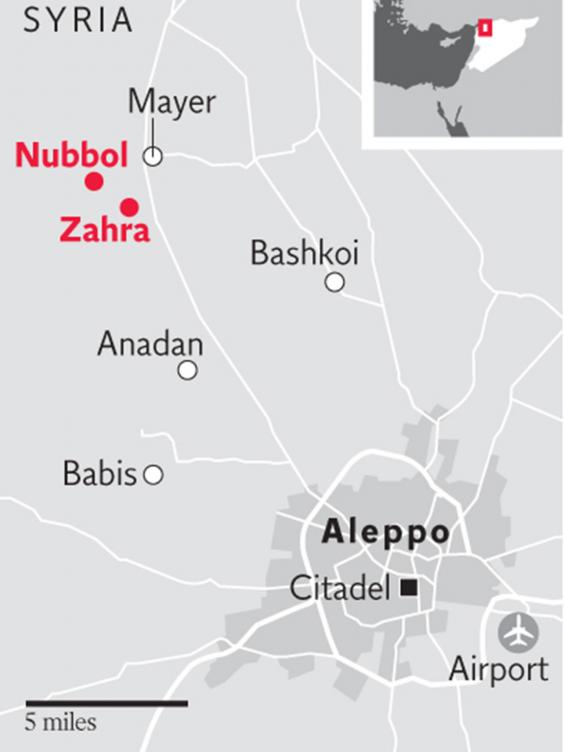 When the siege began, Wanous said, the Syrian government resupplied the villagers with food, bread, flour and medicine. The helicopters also dropped ammunition. There were three or four flights every day during the first year. “Then at about five o’clock, at dawn, on 30 June 2013, a helicopter came to us with some returning villagers from Aleppo and a staff of seven teachers for our schools who were to hold the school exams here,” Wanous said. “Someone in Mayer fired a rocket at the helicopter and the pilot managed to steer it away from the village and it crashed on the hillside outside in a big explosion. There were 17 on board, including the pilot and extra crewman. Everyone died. The bodies were in bits and all were burnt. That was the last helicopter to fly to us.” The wreckage of the helicopter still lies on the hillside.

But there were Syrian Kurdish villages to the north of Nubl and Zahra and Kurdish fighters from Afrin tried to open a road to the besieged Shia; yet Nusra managed to block them. So the Kurds smuggled food to their Syrian compatriots by night. There are differing accounts of what happened next. Some in the village admitted that food prices became so high that poor people could not afford to eat. The authorities say that at least 50 civilians died of hunger. Fatima Abdullah Younis described how she could not find medicine for her sick mother – or for two wounded cousins who could not be cared for and died of their injuries. “God’s help was great for us and so we were patient,” she said. “But we suffered a lot and paid a heavy price in the blood of our martyrs.” During the siege, Ms Younis learned that her nephew, Mohamed Abdullah, had been killed in Aleppo. She and her husband have lost 38 members of their two families in the war.

But the war around Nubl and Zahra is far from over. I drove along the route from Bashkoi, which the Syrian and Iranian forces took to reach the villages, and found every house, mosque and farm destroyed, the fields ploughed over, olive trees shredded by the roadside. Big Russian-made tanks and trucks carrying anti-aircraft guns blocked some of the roads – driven in one case by Iraqi Shia militiamen with “Kerbala” written on their vehicle – and just to the east of one laneway a Syrian helicopter appeared out of the clouds and dropped a bomb on the Nusra lines half a mile away with a thunderous explosion and a massive cloud of brown smoke. Ramparts of dark, fresh earth have been erected alongside many roads because snipers from Nusra and Isis still shoot at soldiers and civilians driving out to Aleppo.

There seemed no animosity towards the Iranians – whose battledress is a lighter shade of camouflage than the Syrians and whose weapons and sniper rifles seem in many cases newer and more sophisticated that the old Syrian military Kalashnikovs – and you had to talk to the families in Nubl and Zahra to understand why. Many of them had visited the great Iranian shrines in Najaf and Kerbala and several women, including Fatima Younis, had sent their daughters to Tehran University. One of her daughters had – like other young women from the villages – married an Iranian. “One of my daughters studied English literature, the other Arabic literature. My Iranian son-in-law is a doctor,” Younis said. So, of course, when the Iranians arrived with the Syrians, they were greeted not as strangers but as the countrymen of the villagers’ own brothers-in-law.

“The foreign forces came to us because they felt our suffering,” Younis said. “We appreciated their sacrifices. We are proud of them for helping us. But we are Syrian and we have loyalty for our country. We knew that God would help us.” But what of their Sunni neighbours? One old woman holding a grandchild in her arms said it would be “very difficult” to forgive them, but her younger companion was more generous. “Before the attacks, we were like one family,” she said. “We didn’t expect we would ever have a problem in the future. But we are simple people and we can forgive everybody.” 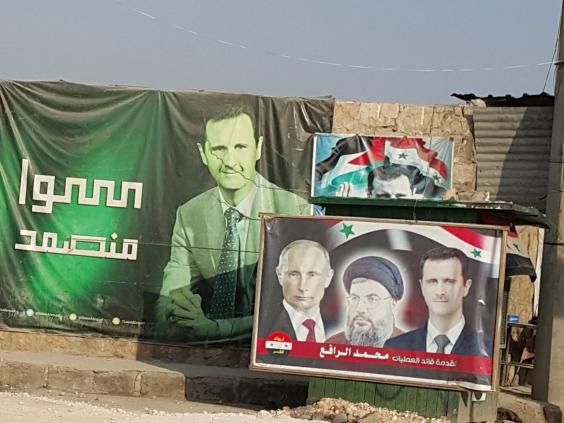 There was no sign of Hezbollah fighters in the villages, although everyone said they accompanied the Syrians and Iranians into the battle. But there was one imperishable sight on the walls: a newly minted poster showing the faces of Vladimir Putin, President Bashar al-Assad and Sayed Hassan Nasrallah, the Lebanese Hezbollah leader. Rarely, if ever, have the forces of Russian Orthodoxy, the Alawite sect and Shia Islam been brought so cogently together.

The men who defended Nubl and Zahra – they also used a B-9 rocket launcher to shoot at Nusra – at first called themselves the “National Defence Force” and then just the “National Defence”. It remains unclear whether they were partly made up of pro-government militias – although such units scarcely existed in this region at the start of the war. The police commander, Rakan Wanous, is an Alawite – or, as journalists always remind readers, the Shia sect to which Assad belongs. Indeed, he is the only Alawite in the area.

6 thoughts on “Syria civil war: The untold story of the siege of two small Shia villages – and how the world turned a blind eye – Robert Fisk”