How to beat ISIS involves giving moderate Shia, Sunnis and Kurds something to fight for that is sustainable…and, something new:  guaranteed U.S. coalition support until the job is done: and separate states. Absurd?Should we send in more troops to Iraq and boots on the ground in Syria? Another year long bombing campaign makes little progress (Mindful of US military airstrike in Iraq having taken out No. 2 leader, Fadhil Ahmad al-Hayali, of ISIS, while impressive, these “martyrs” will be quickly replaced).

These are no longer the right questions for the vacuum left by our sudden, politically-motivated evacuation and subsequent entrance of ISIS. The invasion of Iraq was debatable, but, leaving after it was stabilized in 2007 was a mistake that invited opportunist Takfiri ISIS (Daesh).There is another answer to a different set of questions? What is the history of the region and how was it formed, and should it evolve into three separate states?Iraq was artificially drawn by post-WWI British, American and French after the breakdown of the Ottoman Empire. Should it remain one Iraq? One Syria? Not necessarily.The reason the Iraqis are resistant to fighting is due to their conflict of interests: memories of Baathist mistreatment of Shias and Kurds, post-Saddam civil war, in-fighting, and a current rushed and ill-trained, disloyal, disparate Iraqi Army that flee when the hardened Jihadist turn up the heat. The moderate Sunnis are understandably frightened into joining ISIS, as they see no alternative. Shia, long oppressed in Iraq, understandably align with Iran. Kurds have their own neglected interests never before addressed. This can change.

Give them all something to fight for. The current president of Iraq, Muhammad Fuad Masum is Kurdish and may see the potential. Even he has proven to be ineffective in holding an impossibly diverse army together, and the US cannot and should not unilaterally take over.Each ethnic group will fight ISIS and beat them if we give them something to fight for and then support them to ensure victory.U.S. General Dempsey suggested how insertion of a small force might be effective: 2500 U.S. Special Forces with three times that troop level of non-combat support services providing Medical, Communications, Intel, etc. in the field. This highly trained special team would combine with the Iraqi Army and could beat ISIS in their own sandbox. But, the problematic U.S. strategy must change. We need to do what we say we’re going to do, and see the job through without leaving prematurely. “Stay the course,” means you end up at a destination.The key to victory over ISIS is found in reality, not the pretense of holding together a unified Iraq as important, when it was never unified. Instead,  separate Iraq into 3 realistic provinces:A Kurdistan, a Sunni state and a Shia state – all new independent.
Radical idea?

Consider this: Ignoring colonial delineations for now, Iraq was Mesopotamia and divided up into sections by well-intentioned Westerners. Global shifts of borders was and is a common phenomenon throughout history due to invaders, marauders, imperialists and colonialists – borders change. Iraq may be an idea that is no longer viable. It is in fact, made up of Kurd, Sunni and Shia regions.

How to proceed: Hold a U.N. Summit or Council of Iraqi and Syrian Tribal & Moderate Umma Leaders from each region including a U.S. Coalition, to discuss the possibility of separate states to include evenly divided oil interests.

Soldiers go to war as a service to their native country – they answer the call. They do not get to choose what is a “just war.” Those Americans who died in Iraq, did so ridding a tyrant who high-jacked a country, and oppressed Shias and Kurds. Those Americans and Iraqis who died there from 2003 to 2014 should not have died in vain. And since then, too many innocent Iraqis were caught in the cross-fire, and needless civilian casualties due to a combination of good and evil. “The good:” a well-intentioned, but ineffective bombing campaign launched to keep U.S. boots off the ground; and “the bad:” an immoral Islamic cult, Wahhai/Salafist/Deobandi Jihadists, i.e. Daesh, who murder men, women and children.

Too many Islamic moderates left in the wake were left no choice but to be coerced into radicalization from fear. We owe all of these regional fighters and victims and the U.S. wounded warriors an “Iraqi region” free of ISIS.

Retiring U.S. Army General Ray Odierno confirmed that Iraq was stable in 2007 after the surge. Also, that leaving this fragile peace was a mistake and the vacuum invited opportunist ISIS. We can reverse this failed decision; this lack of a coherent strategy.

No one in the U.S. trained Iraq/Syrian Army currently is sufficiently motivated to endure against an entrenched ISIS. This is how we beat ISIS: by giving the moderates something to fight for; then settle sectarian interests:

Anbar province goes to Moderate Sunnis;
Mosul to the Kurds (Kurdistan);
Bashra to the Shias.

Syria? Syria also is emerging into disparate regions control; it can be partitioned:
Rid the terrorists in Syria, namely, Khorasan, al-Qaeda and Nusra. They can be eradicated only if moderate Sunnis have a stake in beating these Takfiri Salafist Jihadists. Terrorist organizations can be decimated with the help of Egypt and Turkey if stakeholders have something sustainable for which to fight. The Saudis, Kuwait, U.A.E., Yemen, Bahrain also have a stake in a balance of power in the region.

Syria: At first the effort to rid Syrian President Bashar al Assad’s forces seemed simple, although now the war in Syria shows no signs of abating.

Al Assad’s forces continue their fight to recover ground against the fratricidal rebel army.  There is little incentive for the regime, heavily backed by Iran and Russia, to concede power to its sectarian rivals at the behest of Washington at the upcoming peace conference. Though it may still play out in the battlefield of its own accord. Syria could break into sectarian statelets or is destined to once again have Alawites regaining full control and the Sunnis forced back into submission.

The 1916 Sykes-Picot agreement delineated an awkward assortment of nation-states in the Middle East; this was one of them. Syria’s borders are a function of European marks on paper.

The romantic term, Levant, was from Latin, “levare” (“to raise”) from a term emanating from seamen on the Mediterranean watching the sun rise in the east. Syria was merely considered a transient caravan route as was all the Levant, where Arab merchants traveled with precious goods on camels and carts. In the Hejaz, (Saudi Arabia), Arabs facing the sunrise to the east, saw Bilad al-Sham, or the “land to the left” of Islam’s holy sites on the Arabian Peninsula.

The historical Muslim conquests led to diverse religious sects in the region of Syria, including a substantial Shiite population, including Sunni dynasties emanating from Mesopotamia, the Nile Valley and Asia Minor. Syria is thus a Sunni-majority region under Shia rule. While Sunnis came to heavily populate the Arabian Desert and the saddle of land stretching from Damascus to Aleppo, the more protective coastal mountains were meanwhile a mosaic of minorities.

The meddlesome French mandate ended in 1943, culminating in a coup by Hafiz al Assad in 1970 that began the dubious Alawite reign over Syria. That long Alawite minority ruling Syria is coming apart. Alawite forces are entrenched in Damascus and steadily regaining territory. Lebanese militant Hezbollah back the Alawites by defending the trade routes from Damascus through the Bekaa Valley to the Lebanese coast, through the Orontes River Valley to the Alawite Syrian coast. As the Alawites hold Damascus, they control the economic heartland.

Syrian forces loyal to al Assad continue offensives that are unsuccessful to retake control of Aleppo. In the far north and east, Kurdish forces carve out their own (Alawite regime is more of a threat to Turkey than to Damascus at this point). Alawites continue to gain ground in Syria with aid from Iran and Hezbollah, as Sunni jihadists backed by Saudi Arabia promise to become more active in Lebanon.

The United States finds itself once again leading a complex and ill-fated peace conference to reconstruct Syria. Why? The U.S. has no strong interests there, other than stability of the balance of powers. A split of regional states devoted to Kurds, Sunnis and Alawlites could be no worse than a continued Civil War.

Obama’s publicly stated red line ended up an embarrassment when crossed with no action. We abhor the prospect of  U.S. intervention.  The goal to ensure al Assad is not part of a Syrian transition is of little consequence now, since the infiltration of Daesh (Islamic State). The desert wasteland linking Syria to Mesopotamia is infiltrated by radical Sunni Jihadists backed by Saudis. Sunnis moderates join the forces most likely to win. A stalemate abides. No side is currently capable of overwhelming the other as civilians are caught in the bloodletting middle. 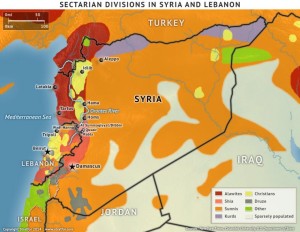 If a split- where Shia stays in al-Assad region; the rest of Syria can be allotted to moderate Sunnis, and the Kurds in the north (though realistic negotiations with Turkey would be necessary). Such a solution can only be realized in Syria if the Islamic State, Al-Nusra Front, the Khorasan Group among other al Qaeda spit-offs are turned on by the moderate Sunnis in this region.

The U.S. and coalition can be recharged with these new stakeholders. We stop the bombing campaign that has proven useless for asymmetric warfare.

In Syria, there is less a need for U.S. Special Forces, if sectarian fighters turn on the Islamic State. In Iraq, we may need to go in with Special Ops with ample operational support for our Special Forces, and go in with impunity. We then take out ISIS with motivated, moderate Sunnis, Shias and Kurds alongside of us  – with something at stake now. Shias fight as stakeholders, and Kurds fight for a long awaited homeland, as do moderate Sunnis. who shake the Baathist legacy.

A valuable key: America must change its tendency of conventional warfare bombing from on high, and ineffective cycle of invasion, bomb, and leave. Lessons we did not learn from our history, as we came and went in Vietnam. Communists put millions to death in the “Killing Fields” of Vietnam, Laos and Cambodia after the U.S. left South East Asia. We blundered into South East Asia (if JFK had not been assassinated, his policy was “no American troops, only advisors), only to lose 58,209 American soldiers, and then, leave when public opinion changed.

Note that the Korean war was followed by peace because we are still there. The secret is in the lessons of history: the US must change that cycle: When we commit to a just cause we must not abandon these stakeholders. We underwrite a workable vision and give the stakeholders something to fight for.

The U.S. should leave only when the region is stabilized and we are asked to leave, in the wake of a stable region. What is a stable region? An elected government reflective of public welfare, with sufficient infrastructure in place capable of defending its territory, and a police and security apparatus free of corruption, well-trained, and sufficiently armed to defend its citizens. The public must be guaranteed safety from domestic and foreign terrorists. Only then is a nation stable.

I’ll end with a caveat. This scenario above is just one attempt at an endgame. I don’t pretend to have all the answers. There is no easy solution and even this one with all potential flaws, should be understood as merely a strategic option that may stop the bloodshed. It isn’t perfect, but there is no perfect solution to imperfect geopolitics.

But, to watch this civil war and make halfhearted attempts from afar is not a strategy. It becomes yet another historical, fratricidal bloodletting where the women and children end up suffering the most and are displaced; an irresponsible human rights catastrophe. 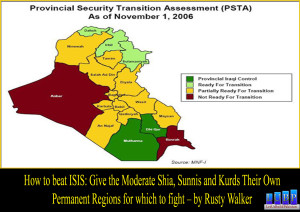 8 thoughts on “How to beat ISIS: Give the Moderate Shia, Sunnis and Kurds Their Own Permanent Regions for which to fight – by Rusty Walker”