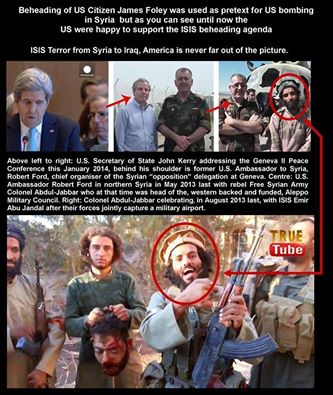 “Some information or derived conclusions are wrong.
But, basic analysis is true and you will never see this on CNN, BBC etc.
The families of Saud, Wahhaab, Khalifa, Thaani, Nahyaan etc in association with the US, EU and the Zionists are fueling, funding, training, equipping and covering the murderers in Syria and Iraq.
“Great piece… My only criticism is that you never mentioned that the free Syrian army has always been connected at the hip with Al-Nusra, the Syrian branch of Al-Qaeda. That is another part of this whole mess that people fail to see. That ISIS is Al-Qaeda, the same CIA operation, with a new name. It’s just a new brand. From the very beginning all the way back to the mujahideen in the 70’s and 80’s at the height of the cold war, every aspect of this has been by design of the US government along with various others, many of which you mentioned in the video” – Jamie Peay, Dallas Texas.
“I come from Mosul. The first city in Iraq that ISIS took over It’s the second largest city of Iraq.
There were only a few hundred members of ISIS when they attacked the city which was full of Iraqi (new Iraqi ) army.
It took ISIS a few hours to take total control of it. They were equipped with the most advanced weapons and military machines. Most of them spoke English and other non Arabic languages!!!
Who are they? Who trained them?
Who finances them ? Who supports them?
I can easily say “NO ONE” knows!
Now they control one third of Iraq and half of Syria, an area bigger than Britain.
They are exporting petrol. For God’s sake and no one is stopping them.
How long and how much more will this suffering go on? And why is it a mystery at least to us, the main people who are affected by their brutality?
No matter what scenarios we hear and how many analyses we read the fact still remains . . . “NO ONE KNOWS !” – Zina Al Nakeeb”

Truth in Media, Origins of ISISBen Swann explores the origin of ISIS that has already been long forgotten by American media. Swann takes on the central issue of whether or not ISIS was created by “inaction” by the United States government or by “direct” action.

One thought on “Was ISIS created by “inaction” by the United States government or by “direct” action: Ben Swann’s video”